**2021-NOV Update**  With the release of Orbi Router Firmware Version V2.7.3.22 the telnet option is no longer available in the debug menu.  This means the steps below will not work unless you are a earlier router firmware version.  I looked for other Orib solutions but didn’t find any.  However, I solved this issue by using an additional firewall using NAT between VLAN74 and VLAN 75.  If you find an Orbi solution, please post a comment and I’ll be glad to update this blog.

Last April 2019 I decided to update my home network with the Orbi WiFi System (RBK50) AC3000 by Netgear.  My previous Netgear Wifi router worked quite well but I really needed something to support multiple locations seamlessly.

The Orbi Mesh has a primary device and allows for satellites to be connected to it.  It creates a Wifi mesh that allows devices to go from room to room or building to building seamlessly.  I’ve had it up for a while now and its been working out great – that is until I decided to ask it to route more than one subnet.   In this blog I’ll show you the steps I took to over come this feature limitation but like all content on my blog this is for my reference. Use at your own risk.

To understand the problem we need to first understand the network layout.   My Orbi Router is the Gateway of last resort and it supplies DHCP and DNS services. In my network I have two subnets which are untagged VLANS known as VLAN 74 – 172.16.74.x/24 and VLAN 75 – 172.16.75.x/24.   VLAN 74 is used by my home devices and VLAN 75 is where I manage my ESXi hosts.  I have enabled RIP v2 on the Orbi and on the Dell 6224 switch.  The routing tables are populated correctly, and I can ping from any internal subnet to any host without issue, except when the Orbi is involved. 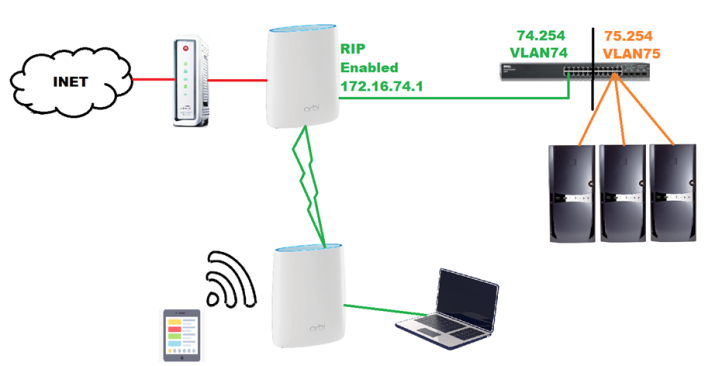 Findings:  By default, the primary Orbi router is blocking any host that is not on VLAN 74 from getting to the INET.  I believe Netgear enabled this block to limit the number of devices the Orbi could NAT.  I can only guess that either the router just can’t handle the load or this was a maximum Netgear tested it to.  I found this firewall block out by logging into the CLI of my Orbi and looking at the IPTables settings.  There I could clearly see there was firewall rule blocking hosts that were not part of VLAN 74.

Solution:  Adjust the Orbi to allow all VLAN traffic (USE AT YOUR OWN RISK)

Note:  Unfortunately, this is not a permanent fix.  Once you reboot your router the old settings come back.  The good news is, its only two to three lines to fix this problem.  Check out the links below for more information and a script.

Easy Copy Commands for my reference:

Review: Wireless Network Devices All in One vs. Standalone

I’m sure like most of my fellow computer geeks we get asked quite a bit around home wireless networks etc. Well, I’ve been in the market for a new Cable Modem and Router and in the past I’ve never recommended the “all in one” solution (meaning Cable Modem and Router/Firewall in one unit). Mainly this recommendation was based on my field experience back in 2007 and seeing so many of them fail. This week, going against my own advice, I gave the Netgear C3700-100NAS all in one a try for $99. Not a bad deal as it means not as many cables, it has an integrated DOCSIS 3.0 cable modem, and it’s on COX Phoenix AZ supported list. This unit worked well for about 20 mins and as I was reading reviews around its issues, it started having them. Over and Over again it slows down. You’d think by 2016 they’d have the all in one finally figured out, but alas they don’t. My recommendation still stands, avoid the all in one.

What I have been recommending for home users in the Phoenix Area with Cox Cable running their 60-100Mbs Internet are the Arris Motorolla SB6141 Cable Modem and the NETGEAR WNDR4500-100PAS N900 wireless router. I’ve had the combo since 2012 and it’s been very rock solid. If I do have an issue with this combo it is usually outside of their control, meaning the cable company is having an issue.

If there is enough interest in the post, I’ll post up how the other 2 routers work out. Enjoy!

This entry was posted in Networking, wireless.